Niccolò Machiavelli has a couple things to teach anybody looking for traction in the freelance footrace.

1) That which is easy to gain is hard to keep.

2) That which is hard to gain is easy to keep. 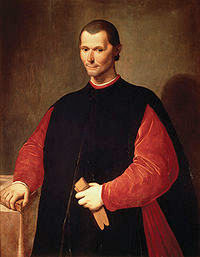 Say what? You thought the only people reading Machiavelli are mustache-twirling comic book villains?

The backstory: A couple weeks back I got a shiny new iPad 2, which I promptly put to work downloading free books to test the iBook app. I’d never read Machiavelli’s “The Prince” so I looked it up, found a free copy, downloaded it and started reading.

Didn’t take long to see why it’s been a classic for over 500 years. The guy had statecraft down cold.

Written during the Renaissance, “The Prince” guided political leaders of that era on how best to widen their sphere of influence. Naturally, this wisdom has been wildly misused over the centuries, but I came across two little slices of insight in “The Prince” that struck me as relevant to modern-day freelancing:

Machiavelli observed that if you’re a prince ruling one principality and you’d like to dominate the duchy next door, you can do it the easy way or the hard way.

The easy way is to keep all the duchy’s princes at each other’s throats while you sneak in and exploit the absence of a strong leader. Fatal flaw of this tactic is that the same princes plotting against each other will plot against you from the minute you take over, and they’ll bounce you out for the same reason you bounced in — nobody’s tough enough to keep all the princes in line.

Machiavelli’s idea of the hard way: Field an army and crush the nearby princes in battle. Once the prince proves he’s the baddest dog in the duchy, nobody dares to challenge him; the realm is his to do with as he wishes (for all his notorious reputation, Machiavelli actually advised benevolent leadership, as dictators tend to incite rebellion).

In Renaissance times, it was far more expedient to plot your way to the top via chicanery than it was to do the Roman thing and march in with legions. Machiavelli’s point: The Romans ruled for centuries while most European princes were lucky to rule for a few months.

And this relates to me how?

First you have to promise the world you won’t use any of Machiavelli’s wisdom to launch wars and foment widespread suffering.

Promise? OK, we can proceed.

It’s very easy to find work writing on somebody’s blog for $2 a post or editing for a content farm at $2 per article.

But why is it hard to keep these gigs?

Mainly because you will either starve to death or go stark raving mad trying to earn a living doing crappy work on slave wages. And every hour you spend working for chicken feed prevents you from starting a chicken ranch.

Furthermore, price — not skill — is the main function of content-farm work, and there’s always somebody in some part of the world more desperate than you are, willing to do the same work cheaper. Your employers are paying so little that it won’t cost them much to find those people.

If you take this work, you’ll find that the same forces that made it available to you today will take it away next week.

Thinks of all the not-even-remotely-easy tasks required to find good-paying freelance gigs:

Granted, freelancers are frequently sick and tired of their clients, but as the saying goes, “it’s a good kind of tired.” The exhaustion that comes from earning a living is far better than the exhaustion of not earning one.

Once you have a track record of helping companies make more money with you than they were making before you came along, the gigs will seemingly start flowing in with ease. But it won’t happen without the hard work that must come first.

When you’re starting out, friends may drop plum gigs into your lap, but you won’t have gotten them the easy way. Think about everything that went into building the relationship that got you to that point: If you had to do it all over, it’d be a major undertaking.

Once you’ve gotten a good-paying gig, you’ve earned the chance to do what you excel at — writing, editing, translating, what have you. Once a client finds you reliable, talented and trustworthy, there’s very little chance of getting fired.

To put it in Machiavellian terms, you dominate the only duchy that matters: the brain of the client who values your work.