It’s becoming harder to ignore Klout, that white-on-orange number so many social media geeks are obsessing over these days. Count me among the obsessed: I think I have more than I deserve. 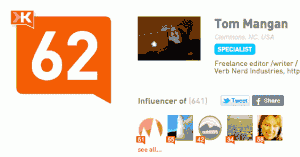 Klout calls its ratings system “the standard of influence on the Internet.” It doesn’t rate political or social influence; no need to rant that Justin Bieber (100) has more than Barack Obama (86). Klout merely believes people demonstrate their online influence by getting a rise out of their social media brethren.

Klout’s score quantifies how posting content on Twitter and Facebook motivates other people to react — retweeting, commenting and generally spreading the word about useful or entertaining stuff they’ve found online. The top rating is 100; mine is a respectable 62 this morning, which would be cool except that it says I have more “Klout” than:

These folks should all be mopping the floor with little ol’ me: One is a consumer products giant; one runs a newspaper read by thousands of people every day; and one leads local “tweet-ups” and has built a business around attracting clients on Twitter.

So what gives me a Klout edge? 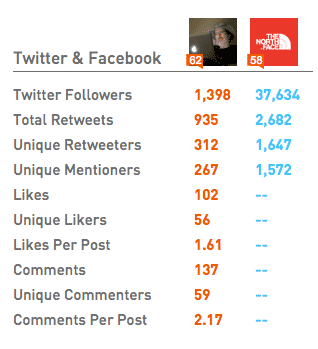 1) It’s not an apples-to-apples comparison

Klout recently added a feature that allows users to import their Facebook feeds in addition to their Twitter feeds — but few people have done this so far. Well, I have, so my Klout score represents all my Facebook postings, and all the comments they generate.

Check out this table comparing me to The North Face. See all those dashes in the Facebook column? I can only assume that Klout isn’t measuring those factors, which is tilting the comparison in my favor. After all, TNF has over 1.26 million “likes” on its FB page. To test this theory, I turned off my Facebook feed and my Klout ranking plunged by six points, so attaching the FB feed makes a substantial difference.

Bear in mind, though, that Klout measures far more than this screen grab reveals. The rating is deeply sophisticated, based on how often people’s posts generate links and the ability of those links to generate a reaction from other influential people.

Still, if you’re active on Facebook, posting lots of links and generating lots of comments and “likes,” I’m betting that adding your FB feed to your Klout account will boost your rating.

Twenty years of separating wheat from chaff (and printing the chaff!) have given me a pretty good nose for sniffing out stuff people want to read and snuffing the stuff they’d just as soon ignore. I’m no Tina Brown but I have picked up a few tricks over the years.

Being a good editor means building a mechanism for finding great stories. I have RSS feeds from hundreds of blogs, magazines and other sources that produce cool links about hiking and camping. If anything’s going on in the hiking blogoshpere, I know about it. Posting the greatest hits generates comments and retweets.

Also, being an obsessive blogger with a strong compulsion to share stuff online can’t be hurting my numbers. Everybody sees great content online; only a few of us go to the trouble of posting links and getting people talking.

Social media gurus hate this: using automation to generate tweets. In their mind you should carefully weigh each and every post, target it to your audience and post the minute you find something neat so you’ll be “in the moment.” I’ll get on that just as soon as days start having 32 hours in them.

Actually, a bit of selective, thoughtful automation can trigger a few retweets that can add a couple points to your Klout score. What I do:

So, does Klout matter?

Klout is just one of many services trying to help people navigate the strange social media landscape. I used to think the score basically represented how much time I was wasting on Twitter, but the more I started concentrating on sharing good content online, the faster my score grew.

It’s not a perfect number (after all, some influential people are bad influences) but more people are paying attention to it every day, so we can’t afford to ignore it just because its numbers don’t add up to our liking.

Great thing about the Internet is that somebody’s probably building Klout’s replacement in their basement right now.